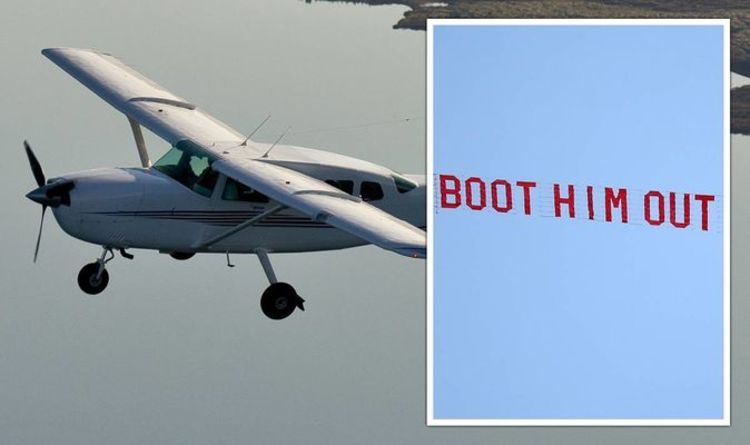 A plane was seen flying over the Elland Road stadium on Saturday holding up a banner that read “Boot him out” with a link to an anti-Boris website. The page contains a petition demanding the prime minister’s resignation which they say has been signed almost 80,000 times. Mr Johnson is under pressure from opponents in the opposition benches and even within his own ranks to quit following the Partygate scandal and fears he no longer has the power to run the country.

The banner urged people to visit an anti-Boris website with a petition titled ‘Boris Johnson must be removed from power’.

It read: “Boris Johnson must be removed from office immediately. He has proven himself to be a serial liar whose actions bring this country to its knees.”

The plane also made a trip over Old Trafford during Manchester United’s clash with West Ham.

Several other petitions have been put in place asking Mr Johnson to resign after a tumultuous few weeks.

He says: “Boris Johnson must step down to enable competent and decisive action against Covid-19.

“He must be immediately replaced by a group of MPs who, unlike him, value human lives and are ready to take decisive action based on the best and most successful international practices used in the fight against the pandemic.

“Politicians who are transparent, accountable and open with the media and willing to admit their mistakes and seek help from other nations.”

Mr Johnson is facing calls to step down after news of Downing Street rallies during the lockdown broke.

Downing Street staff were asked if they would like to attend a ‘bring your own booze’ rally on May 20, 2020, prompting the launch of an investigation.

Since the news, more gatherings have come to light as senior civil servant Sue Gray continues her investigation.

But it was the Christmas holidays that initially sparked the inquiries with Mr Johnson’s spokeswoman Allegra Stratton quitting after a video emerged of her joking about a December 18 rally at a fictitious press conference.

London mayoral candidate Shaun Bailey was also pictured at a Conservative Party Christmas rally where he posed with staff as a buffet could be seen in the foreground.

DO NOT MISS
Russia warned of ‘swift’ punishment if Ukraine invasion continues [REVEAL]
Covid outrage: Tice hits out at ‘shameful’ teachers over mask call [INSIGHT]
No10 officials ‘partyed for 7 hours’ on the eve of Philip’s funeral [REPORT]

Despite calls for resignation, even from some members of his party, Mr Johnson said he would do nothing until the Sue Gray investigation was made public.

His critics include backbench MP Caroline Nokes who asked her party leader to step aside so he doesn’t drag other Tories with him.

Speaking on ITV’s Peston, Ms Nokes said: ‘But now unfortunately he looks like a handicap, and I think he’s gone now or he’s gone in three years at a general election.

“It’s up to the party how it goes, I know my thoughts are he’s hurting us now.

“He hurts the whole conservative brand for his reluctance to accept the restrictions that other people have lived through.”

Former cabinet minister David Davis lashed out at Mr Johnson in the House of Commons and said: ‘In the name of the good god go ahead.’

The majority of Scotland’s Tory MSPs threw their support behind Mr Ross but drew ire from House Leader Jacob Rees-Mogg, who called Mr Ross a ‘light-hearted’ who never fully backed the Premier Minister.