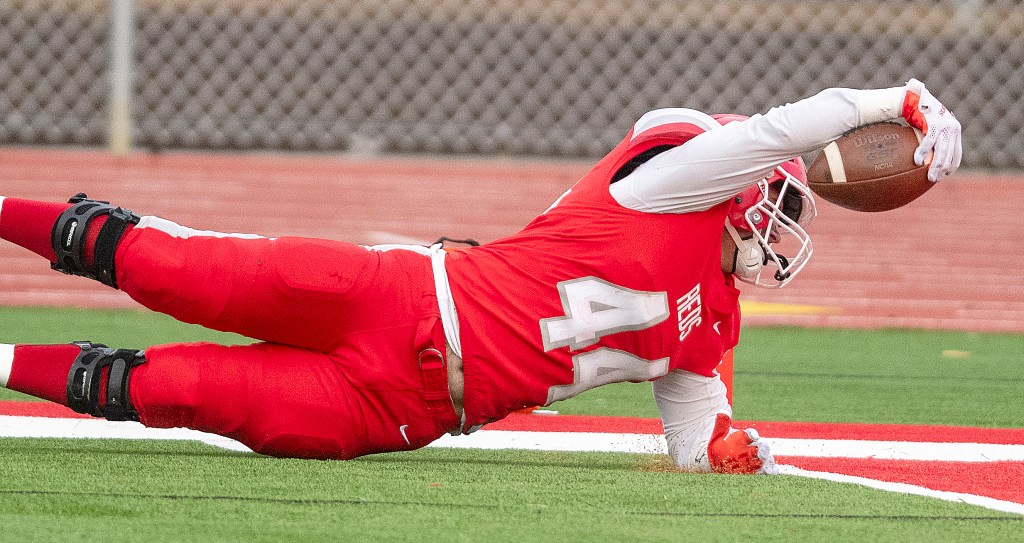 EATON – Eaton’s football players may have had every reason to be distracted ahead of their game on Saturday night.

They had just returned to school, weeks later than usual.

They were opening their dazzling new stadium on their freshly opened campus.

On top of all that, they were paying tribute to one of their most famous alumni moments before kick-off.

But the fact that the Reds had plenty to be distracted about was reason enough to be as focused as ever.

Eaton maintained that laser-like focus from the opening kick-off until the dying seconds of a clear 44-0 non-league win over longtime rivals Platte Valley.

“We talked about this (Friday) night in training,” Reds manager Zac Lemon said. “We went through all the logistical issues, the timing and everything that was going on today, and we ended with: ‘And don’t forget there’s a game tomorrow that we have to be ready for. ‘ So I couldn’t be more proud of them and the way we performed.

Eaton improved to 2-1 on aggregate. The Broncos fell to 2-1 overall.

The Reds – the two-time defending Class 2A champions – entered the game ranked third in 2A by CHSAANow.com. Platte Valley is ranked fourth.

But, almost immediately, the game lacked the drama of that usually hard-fought rivalry game, thanks to Eaton’s unstoppable offense and behemoth of a defence.

Just moments after Eaton retired the jersey of hometown hero and alum Mitch Unrein – who played nine years in the NFL – the Reds took the first 71-yard drive in four games, capped by the True’s 46-yard burst in the end zone just 2:01 into the game.

“We’ve been working on this (game) for a while,” Smith said. “With this participation, we wanted to go out and do our best for everyone. … We wanted to honor Mitch and open this stadium on the right foot. Today, our football players were giving tours, and all the elders were saying, “You have to beat Kersey. So we gave everything we had.

Aside from the brand spanking new stadium – on the recently unveiled immaculate Reds campus – another indication that this game was very different from the usual Eaton-Platte Valley game was the fact that there was a running clock. execution, because of the mercy 40-point rule, even before the end of the first half.

The Reds extended their budding lead to 41-0 when senior quarterback Walker Martin connected with fellow senior Zac Grable for a perfect 29-yard touchdown pass on a deep tilt with 1:18 left in second quarter.

Eaton won the distance battle 340-37, even though the starters only played in the first half and the clock ran with little interruption in the second half.

The Broncos’ program is as famous as the Reds’.

But on Saturday, it was Eaton who was in the festive mood.

And the Reds weren’t going to let anyone or anything spoil the party.

“We were excited to come out here on our new home turf, finally,” said Eaton senior Morgan Tribbett, who rushed for 70 yards and two touchdowns on eight carries while making a deep impact on defense. “All the festivities were fun. We have a great community. It’s fun to get out here and show everyone the new land and the new school. But as soon as we showed up at 3:15, Coach Lemon gave us a speech and told us to lock ourselves up. We came here ready to do what we had to do.

Moments before kick-off, Reds superintendent Jay Tapia, principal Jessica Grable and sporting director Steve Longwell gathered at the 50-yard line to collect the No.10 jersey from Unrein, who played for Eaton from 2001 to 2005.

Alongside his wife, Corey, and family, Unrein spoke to the many rallyers at the Reds’ new stadium.

“I’m so blessed to come from here and call Eaton, Colorado my home,” Unrein said as he stepped onto the podium. “Eaton will always be with me. No matter where we end up in life, we can always be proud to be Eaton Fightin’ Reds.

Unrein has been a key supporter of his alma mater over the past few decades.

While playing for the Broncos from 2010 to 2014, he convinced the organization to donate equipment that filled Eaton’s weight room. He was also involved in fundraising for more weight equipment to create a foundation for the long-lasting championship contender Reds program that exists today.

Bobby Fernandez covers high school sports for the Greeley Tribune. Reach him at (970) 392-4478, by email at [email protected] or on Twitter @BobbyDFernandez.