Skip to content
National Assembly Speaker Vuong Dinh Hue hosts a reception for the women’s national football team on the occasion of the International Women’s Day and the 13th National Women’s Congress on March 8. (Photo: VNA)

At a reception held for the team on March 8, Hue highlighted the extraordinary values ​​of Vietnamese women and the great contributions they have made to the country.

Behind the image of sweet and charming women are exceptional strength, strong will, beautiful soul and intelligence that remain the national pride, he said.

“The women’s national football team is not only the pride of the sports cause and football in Vietnam, but also in Southeast Asia,” he said, adding that the players wore the right traditional values ​​of Vietnamese women to a new level in the era of international competition. the integration.

The way they overcame these inconceivable difficulties caused by the COVID-19 pandemic to earn a place at the Women’s World Cup is a perfect example of how far they have come in breaking gender stereotypes, he said, adding that the girls writing a new chapter in vietnamese football history have become an inspiration to the nation.

He also took the opportunity to pay tribute to coach Mai Duc Chung for constantly developing and guiding the players for years, earning his way into the hearts of Vietnamese football fans. 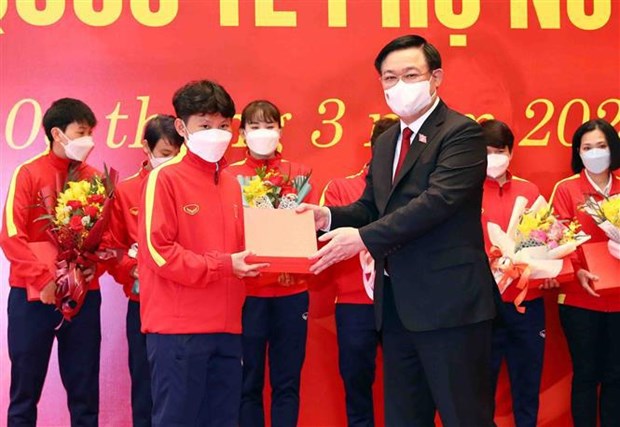 Hue went on to stress the importance of discovering and nurturing young Vietnamese talents both at home and abroad, saying that the development of sports skills should be considered as important as other math skills, in arts, literature or languages ​​so that no talent is wasted.

There should be exclusive mechanisms and policies for the development of training centers for young football talents and improving the training of female footballers, the top lawmaker said, noting that training trips to the foreign and international friendly matches should also be increased to help them gain more experience. and sharpen their skills./.