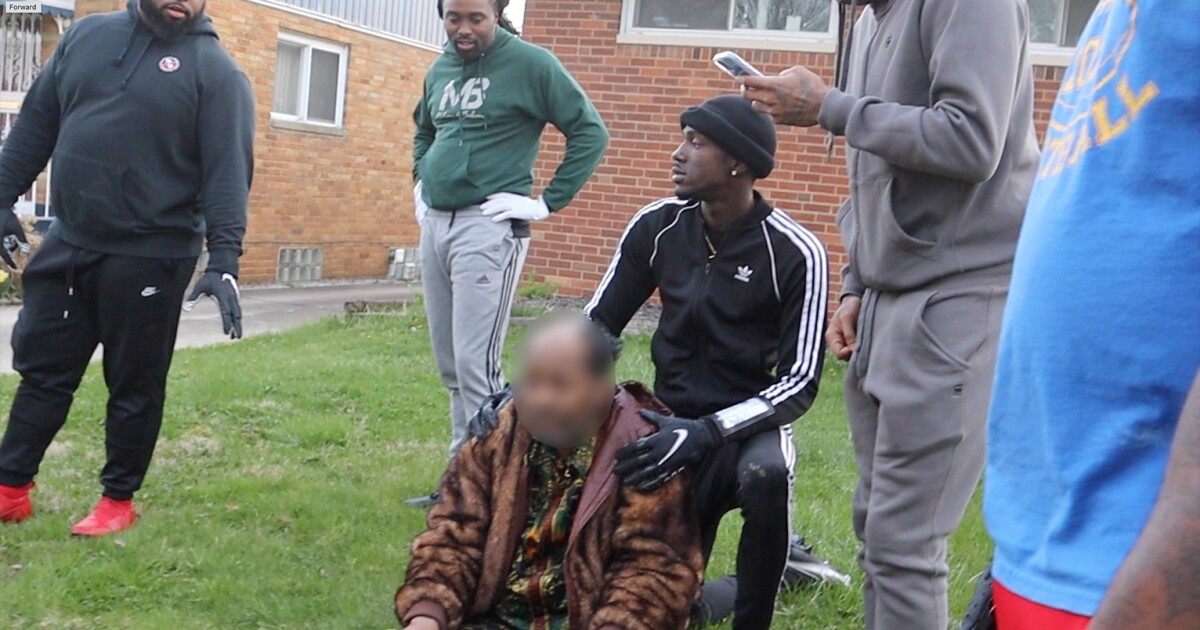 CLEVELAND — A fire swept through a home on the 4100 block of East 173rd Street on Wednesday evening, trapping a man inside his home. That’s when members of the Cleveland Rams semi-pro football team who were training at nearby Roye Kidd Field came into action.

As smoke and flames erupted, crew members rushed to the rescue of the resident, a 59-year-old man. This man’s neighbor, LaBrendt Reese, spoke to News 5 shortly after.

Reese said the family that lived in the house was a staple of the community that had lived there for a very long time. He said he was heading for the exit and then saw smoke billowing from the neighbour’s house and several men carrying his neighbor to safety.

“They were ready to go back to the house,” Reese said of the Rams players.

Watch the fire and its aftermath in the player below:

The Rams practice at the nearby field every Wednesday. Randy Knight, the team’s owner, explained that the team members had smelled the smoke before spotting it. Several members quickly scaled a nearly 20-foot-tall concrete barrier and chain-link fence.

“We all had the same motive without even speaking. No one said, ‘Oh jump out the door.’ We just jumped out the door,” he said.

Diontez May, who has played wide receiver, defensive back and backup quarterback for the Rams for the past six years, was one of the first players to scale the high fence.

“We saw this hand flailing like it was trying to get someone’s attention. Then it fell, like it had just collapsed,” May said.

May pulled the nearly unconscious man through the front door of the house. Then he and two teammates carried him across the street to safety.

“We have an EMS person and a nurse who is on our team, who started working on him, making sure he was okay,” Knight explained.

After rescuing the man, the team asked Reese if anyone was still in the house. Several players, including Bijon Walker, the team’s quarterback, defensive end and wide receiver, rushed to clear other close neighbors.

“Once I finally got over [the fence], I alerted Randy which street it was on, then went to make sure there was no one in that house. Then I walked across the street to the lady here and made sure she was alerted to the situation,” Walker said.

Neighbors and first responders were quick to hail the heroes of the group.

The team, however, is reluctant to accept the hero moniker. Many players, who coach youth teams and strive to set a positive example in the community, said it was simply the right thing to do.

“With a lot of negativity in our community, it’s good to know that we still have a lot of good people out there ready to do a lot of good things,” Walker said.

“We’re all about community work anyway, so that’s something we pride ourselves on – being able to help people and things in the community,” Knight added. “To be able to save a life on a random Wednesday was amazing for us. It’s something we’ll always talk about, something that will always be part of our legacy as a team.

Firefighters arrived and brought the flames under control. EMS then transported the man to South Pointe Hospital for treatment. He was last known to be in stable condition, authorities said. The team plans to give him free tickets for their first game on May 7.

The fire remains under investigation.

Download the News 5 Cleveland app now for more stories from us, as well as top news alerts, the latest weather forecasts, traffic updates and more. Download now on your Apple device here, and your Android device here.