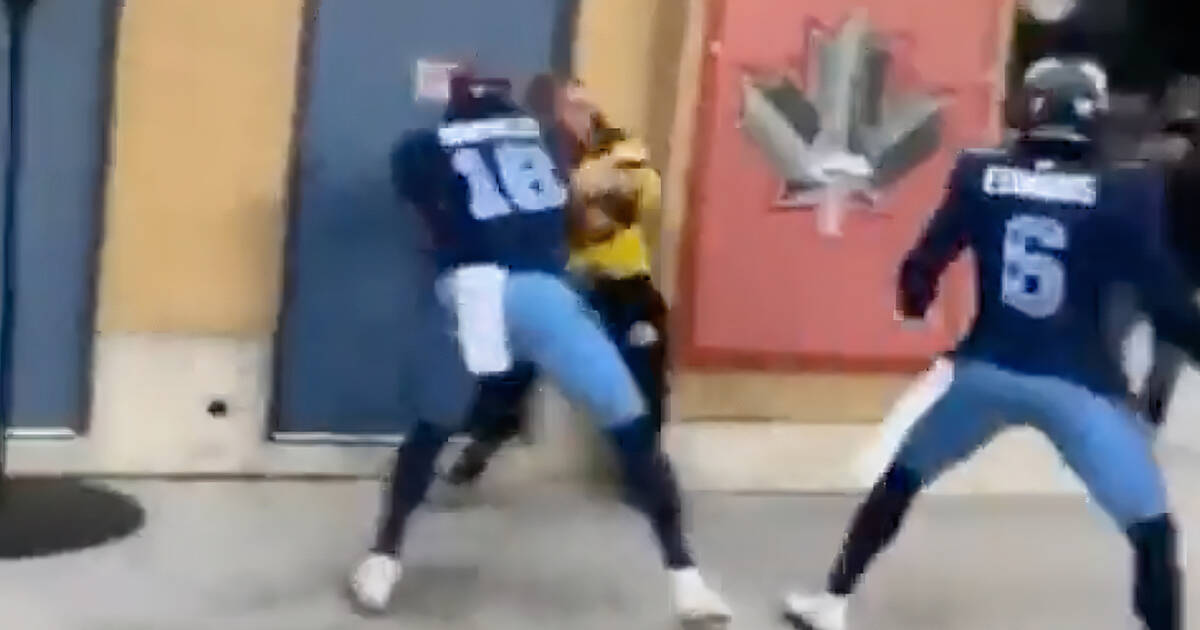 It was a battle between Hamilton and Toronto yesterday as the Tiger-Cats defeated the Argonauts in a fierce fight that ultimately extended far beyond the football field.

Video footage is currently circulating of what appears to be a physical altercation between some Argos players and a Ticats fan following the CFL game East Division Final at BMO Stadium in Toronto on Sunday.

Clips shared by participants show Argos defensive back Chris edwards walking through the crowd, followed by at least three other team members.

A fan dressed in the full Tiger-Cats uniform, with a team flag worn as a cape, is then seen running towards Edwards and pushing him aside, causing a powerful blow from the professional athlete.

WATCH: Things got sour at the Toronto Argos VS. A Hamilton Tiger Cats game earlier after a Ticats fan allegedly spat his beer in a player’s face. pic.twitter.com/PPTjzukmAG

It’s not clear if that punch actually landed, but the Ticats’ obnoxious fan was definitely rocked by BMO safety after the wide receiver. Dejan Brissett stepped in to help stop Hamilton’s rambunctious lover.

A second clip shot from a different angle shows the Ticates fan lying on the ground with at least three Toronto cops and several security guards holding him to the ground.

Some Argos players can be seen watching the scrum, while others return to their locker room, clearly disappointed with the end of their season.

Then, before the eyes of hundreds of people, members of the crowd cross the barrier separating the players and the police from the fans. Cops and security spring into action to secure the area as the Argos fan films can be heard shouting “Classy, ​​Hamilton!”

Full video 2/2
The only thing we know for sure is that BMO security has lost control of the situation. pic.twitter.com/dV4WOp7Lxj

Toronto Police are investigating the incident, but have yet to release details of those involved, what caused the scuffle and whether charges have been laid.

While sharing the clip, 6ixbuzzTV reported that a Ticats fan caused the altercation when he “spat his beer in a player’s face.”

“We are aware of the situation and are reviewing it. We will not comment further at this time,” a CFL spokesperson told blogTO on Monday morning.

MLSE, which acquired the Toronto Argonauts in 2018, has yet to respond to a request for comment.

Thanks to our amazing fans

We didn’t reach the ultimate goal, but YOU made our home a home this season.

Thanks for following this little bird app. You really are the best.

A participant in the match tweeted that “a few fans had blood in their noses” but did not observe any other injuries.

“The Ticates fans were laughing at the players so they rushed at them lol”, wrote the fan, who later noted that they had also seen someone kicked in the face.

With a 27-19 victory on Sunday, the Hamilton Tiger-Cats secured a spot in the 108th Gray Cup championship.

The Ticates face defending champions the Winnipeg Blue Bombers on December 12 at home at Tim Hortons Field in Hamilton.